Is a New York City Desk Appearance Ticket, or DAT, an arrest? What does “Top Offense Charged” mean? Do I need to keep the appearance ticket? If I lose my DAT is that a problem? What if there is a mistake in my name or date of birth, does the Desk Appearance Ticket become invalid? Do I need an attorney or criminal lawyer at my “trial” or “hearing” when I see the judge?

Briefly, the answers to some of your questions are as follows: If you were given a Desk Appearance Ticket you have been arrested. It does not matter if you lose the ticket or there is incorrect information on the paper. A Desk Appearance Ticket merely is a way the NYPD processes lower level arrests, but crimes nonetheless. Read that twice….You have been arrested. You are charged with a crime. Whether you need a lawyer is subjective, but proceed at your own risk. Retaining counsel experienced in these matters has tremendous value. With all of that said, your first appearance is neither a hearing nor trial, but an arraignment where you are formally charged with a crime. Whether you ultimately have a trial will depend on the allegations, evidence and even your criminal defense attorney.

While extensive information relating to DATs, the DAT process, and other relevant materials is available on the websites below, the links herein, and throughout this blog, this entry will breakdown the important information contained on the face of a DAT and what it all means to you.

The easiest starting point is the Defendant Name, Defendant Address, Age and Date of Birth. Obviously, all of this relates to you, the accused. Even if the address is incorrect because you actually reside out of New York, it is likely a New York City area address is filled into this spot because without that local address the NYPD would not be able to give you a DAT. Again, inaccuracies in spelling, address and age are of no consequence. You have been fingerprinted and you are in the “system.” 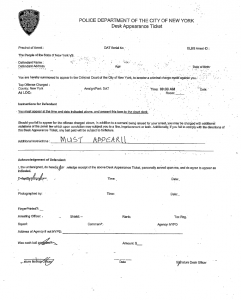 More important is the OLBS Arrest-ID located on the top right of the DAT. This is a unique number assigned to your appearance ticket that will be used to locate your case. Ultimately, upon appearing in court, this OLBS number is changed to a Docket Number. If your case is in Manhattan, your OLBS number will start with an “M”, Brooklyn (Kings County) a “K”, Queens a “Q”. After that letter the year will be reflected. For example, a Manhattan DAT for 2017 would start with “M17…”

The Top Offense Charged will list only one offense. That does not mean it is the only crime you will face when appearing in court. For example, with regularity a shoplifting arrest in New York City will reflect only a charge of PL 165.40 or PL 155.25, but when the District Attorney drafts your case, the complaint will reflect both crimes. In fact, the District Attorney can charge something completely different. In this scenario, if you are charged with a misdemeanor, but it turns out the value of the property exceeded $1,000.00, then despite what your DAT reads as Top Offense Charged, prosecutors could charge Grand Larceny such as PL 155.30. Similarly, if you are arrested and charged for possessing a drug such as cocaine, heroin, Molly or MDMA, you would likely have a top criminal charge of PL 220.03. However, if you also had a pipe, scale or other paraphernalia, you could also face the crime of PL 220.50.

At LOC is the particular location where you must appear in court. Know that some counties have multiple criminal courts. For example, Manhattan has its “main” criminal court at 100 Centre Street and the “smaller” Midtown Community Court at 314 West 54th Street.

The balance of the information contained on the DAT, other than the date and time of the arraignment, is more administrative. Again, if you lost the appearance ticket you would still appear and be arraigned by the court. If you lose it and fail to show, or merely do not appear for any other reason, the court will issue a warrant for your arrest. In the event that you are unable to appear because you live outside New York State or the USA, will be away for college or work, or there is some other compelling issue, your attorney may be able to appear by affidavit. Potentially, the case can also be resolved in your absence depending on the nature of the criminal charges.

Whether you are issued a Desk Appearance Ticket in NYC or you are held in one of the various courts to see a judge, there is no difference in terms of your criminal charge and an impact upon conviction. Simply, be smart and aware. Take a moment to educate yourself on the offense charged and other crimes you may face. Armed with the proper information and counsel you can then put yourself in the best position to avoid what was a costly mistake or misunderstanding from becoming a life altering and career jarring ongoing criminal matter.