Am I the victim of Extortion? Am I being Blackmailed? How are these crimes different than Coercion? I know someone is preying on me and making demands, but what, if any, crime has this person committed? To answer these questions lets examine the following scenarios.

I’m being threatened over some pictures my ex got a hold of. If I don’t pay him he will send them to my employer, landlord and friends on Instagram. I’m being threatened over a compromising video my ex secured without my permission, but instead of wanting money she says that if I don’t tell my family that I’ve done something wrong or admit to my boss I’ve used drugs, she will share it with these same people.

While the above hypotheticals may seem very similar, very similar and the same are quite different. In the eyes of the New York Penal Law, criminal defense lawyers, prosecutors and judges, the above two scenarios are the foundation of two distinct and separate crimes – Grand Larceny Extortion (Blackmail) and Coercion respectively.

In non legal terms, and of obvious value to the vast majority of readers who are neither law enforcement nor criminal defense attorneys, the central difference between Extortion and Coercion are not the threats themselves. Each crimes involves or can involve the same types of acts with similar goals. For example, exposing a secret, whether true or not, for the purpose of subjecting a target to ridicule or financial harm is a means by which an extorter Extorts and coercer Coerces.

What differentiates these offenses then is not the language you use or your physical acts (that may make a particular case stronger or weaker from the prosecution perspective), but what it is you demand or actually accomplish. Want money, a car, payment for rent? Such demands would be extortionate. If property was not provided by the subject of the crime the offense would not be a completed Blackmail or Extortion, but an Attempted Grand Larceny by Extortion. If in fact you get the monies or property, then crime is a completed offense. 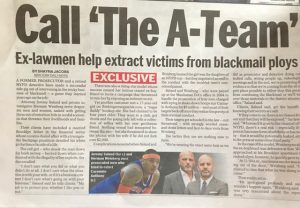 Following this line of thought, instead of seeking property what if you attempt to or in fact persuade or prevent a target from pursuing something he or she is otherwise legally entitled to do or to act in a manner he or she is legally entitled to abstain from? Here, because it is not money or property being sought the offense is either Attempted Coercion or Coercion.

Whether you are the victim or an Extortion, Blackmail or Coercion, or you are accused of one of these crimes, you must protect yourself. Preventing yourself from running afoul of the law before making any statements or demands of another person or potentially fighting back against a blackmailer outside of law enforcement are both options to consider. Whatever you chose, however proactive you want to be, and what defense you utilize to protect yourself, all of it begins with education.

To learn more about the above crimes, defenses to these crimes and means by which you can put a stop to victimization without or without law enforcement, follow the links found throughout this blog.

Saland Law PC is a New York criminal defense firm defending clients against Blackmail and Coercion and victim protection firm representing those who are targets of Extortion and these crimes. Saland Law PC was founded by two former Manhattan prosecutors.